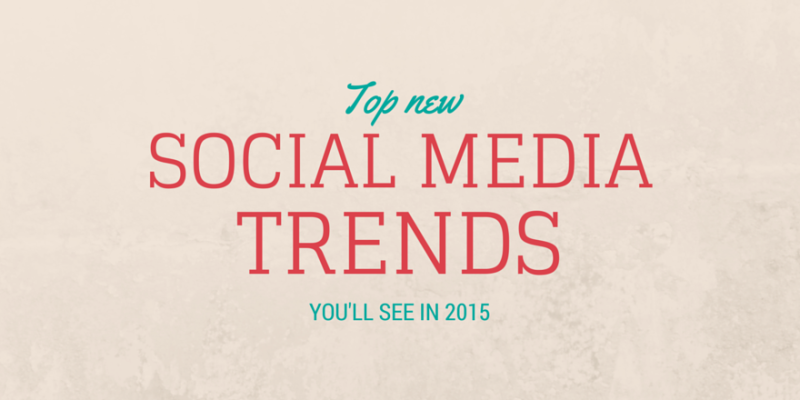 As the year 2014 draws to a close, many of us are looking forward to a nice, relaxing holiday. And it’s well deserved–2014 was a busy year for us! But for marketers? Marketers tend to struggle with letting their brains completely relax, and so are already looking ahead to 2015 and analyzing social media trends to figure out how to plan an even better marketing strategy.

So let’s talk about marketing with social media. What can we expect to see in 2015?

While we don’t think we will be seeing tons of innovation (more on that below), we will see an increase in what’s already becoming popular: More visual content and more mobile content. Let’s take a look at some examples:

E-Commerce will take off

Earlier in the year, Facebook and Twitter began playing around with “buy” buttons that appeared alongside content. This made it so that users could easily make purchases with just a few clicks, and they’d never even have to leave the network.

And guess what? It seems they’re doing pretty well with it.

You can expect this to continue into 2015, with many advertisers pushing hard to integrate this strategy in the top social media sites. By sticking that button in there, it not only increases the likelihood that someone will purchase something from your website, it also gives hard sales numbers for analysts to keep exact track of data. Before, this wasn’t possible. And considering that currently, over half of all mobile searches lead to a purchase, you can see why it makes marketers so giddy. So if you want to be on top of the e-commerce trend, you’re definitely going to be ready to implement these changes in the coming year.

Social media marketing will be even more popular

Do you have a content strategy? You’d better be promoting it with social media!

Content strategy was a central theme to marketing in 2014. And guess what? It’s going to be sticking around for 2015. But this time around, marketers are going to press for a content strategy by leaning heavily on social media distribution.

What does that mean? Basically, there were a lot of companies that created content in 2014, but a good percentage of them didn’t bother to amplify this content through social media channels. And to be honest, that’s just silly. Promoting your content through popular social media platforms should be your primary goal in terms of content marketing. Your reach and visibility is greatly increased through social media. If you need more proof, you can read more here, here, or here. Take your pick

Yes, we know, we said right away in the article that there wasn’t going to be a whole lot of innovation. So you might be wondering: If this is the case, then how can there be so many new social networks popping up? Ello, Yik Yak, and many others have burst onto the scene, so what gives?

Well, there’s always going to be someone new, someone trying to take a slice of the pie that is already being shared between social media giants like Facebook, Twitter, Instagram, and Pinterest. But will they last? Many of these new sites promise true privacy (and this is a draw to many with all the recent privacy breaches), but even if they deliver, it’s still incredibly difficult to make a dent in the already over-saturated social media scene. A large number of new social media platforms end up feeling incredibly empty and lonely, which directly goes against the primary reason people use social media in the first place: to be social!

So while you’re going to see lots of new, shiny sites to sign up for, don’t worry too much about being on top of every new trend: Many aren’t going to last. It’s still worth it to be aware of the trends, though!

Have you noticed any other social media trends that you think are going to be big in the coming year? Let us know in the comments!